Leopard is building an all-new 40 powercat in its factory in Cape Town, South Africa. It will launch the cat there at the end of the year, and then hold a world premiere at the Miami show in February.

The new 40 is the smallest entry in the Leopard powercat fleet, which now has a 46 and a 53. The company says the 40 will have all the comfort and seaworthiness of its larger siblings, but in a smaller package.

The company says the flybridge on the 40 is the largest in its size range. It has an upper helm with a bench seat on the starboard side, and an L-shaped settee and table just aft. A bar area is to port. A hardtop provides weather protection overhead.

The 40 PC has three cabins and two heads below. Standard power is two 250-hp diesels, although 320-hp and 370-hp engines are optional. The cat is projected to cruise at 17 knots, and top out at 20 knots, with the standard power. 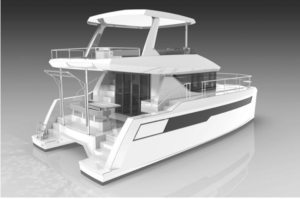 The new Leopard has a large volume of space, since the beam of 21’ 8” is more than half its length. The full-beam foredeck is a massive sunning area, accessible from the side decks or a separate door at the front of the salon.

The salon has a lower helm station with large windows all around; visibility is excellent. A well-equipped, L-shaped galley is on the port side, with seating areas to starboard.

The aft deck, with a table and settee at the transom, is protected by the overhang from the flybridge. Three steps on either side lead down to the swim platform.

Below, side windows, almost the length of the hull, provide seaside views and let in lots of natural light to all the cabins. There is a head, with a shower, in each hull. The engine compartments are isolated aft in each hull, with access only from the outside.

The Leopard 40 PC is for sale to private owners, and it will be become part of the charter and owner management program at The Moorings, where it will be known as the Moorings 403PC.