Lyman-Morse just announced that they’re building hull number two of the new Hood 35 LM at their factory in Thomaston, Maine. It’s the first of that model to have a flybridge, and it’s scheduled to be launched next spring.

The flybridge boat, like the express version in hull number one, was designed by C.W. Hood Yachts in Marblehead, Massachusetts, and the lines are classic. When I first glanced at the rendering I thought of a modern, updated version of a Bertram 31, a Blackfin 32.

Like those boats, the Hood 35 LM Flybridge is definitely built for performance. Power comes from twin 440-hp Volvo diesels with I/O drives. Top speed is projected to be more than 40 knots; cruising speed, more than 30 knots.

For its part, hull number one isn’t exactly a slowpoke. It has twin 480-hp Yanmars and Hamilton water jets, also producing a 40-knot top speed. 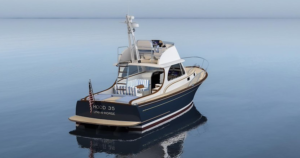 The new flybridge version has the galley up (it was down in the first boat) to make room for more accommodations below. It also has enclosed aft bulkhead. The owner selected a Seakeeper gyro-stabilizer and a genset for extended cruising. Both boats have a cold-molded wood and composite hull, using Douglas fir and western red cedar.

The Hood 35 LM is the second collaboration between Lyman-Morse and Hood. Lyman-Morse also built the C.W. Hood 57, designed by Hood and Stephens Waring Yacht Design in Belfast, Maine.