The Sunseeker 65 Sport Yacht is sleek enough and powerful enough to turn heads in harbors around the world, but now, just to make sure that no one fails to take notice, it is offered with a custom gold paint job.

Sunseekers, of course, are made in the UK. Not surprisingly, a new gold model has been sold to an owner in Southern California. Depending on the light, it’s not really a gold color. In fact, Sunseeker officially calls it a Custom Bronze. Whatever. 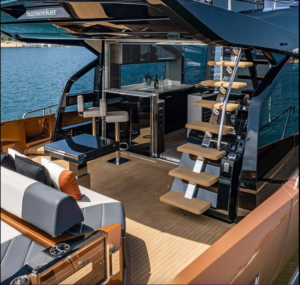 Sunseeker launched the 65 Sport Yacht a year ago, and it has already won an award for Best Exterior Design in its size range at the World Yacht Trophies competition, and an On-Board Design Solution Award for its creative flybridge SkyHelm at the Boat Builder Awards.

The SkyHelm is indeed different, combining elements more often associated with airplanes or sports cars than with large yachts. It features two low-slung, form-fitting, carbon-fiber bucket seats on each side of a console where the throttles are mounted in an airplane-like module. 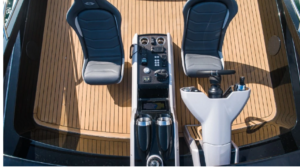 The steering wheel is on an extended column that lifts up to an upright position so the captain can use the Volvo IPS joystick while standing and maneuvering for docking. With the column lowered, the captain can sit and drive in a more relaxed position.

All the way aft, you can carry the tender on the swim platform and use the space under the massive sun lounge in the cockpit as a beach club, with direct access to the water, with a bar, fridge, barbeque and seating.

From the cockpit, sliding glass doors open to the salon, with a large galley aft, a U-shaped lounge and table on the port side, and the main helm, with two seats, forward to starboard.

Below, the owner’s suite is full-beam amidships, with an office space, a side lounge, a walk-around bed and a vanity. A TV is part of a large mirrored wall. The en suite head has a glassed-in shower.

The VIP suite is forward, with a double bed and en suite head; the third cabin has two berths on the starboard side and shares the day head to port.