Jeanneau just announced that it will display its new flagship 40-foot NC Weekender, a 40-foot cruiser with three 300-hp Yamaha outboards, at this fall’s boat shows in the U.S.

The new boat, officially the NC 1295, has signature panoramic windows all around the salon, a large flybridge, a terrace that folds out of the starboard side of the cockpit, and three cabins and two heads below.

Part of France’s giant Beneteau Group, Jeanneau is building the NC 1295 to meet the growing desire for outboard-powered cruising boats in the U.S., while also incorporating other trends, including the desire for several social areas in various parts of the boat and the now-de rigueur fold-down terrace. 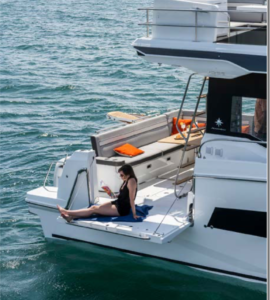 Up top, the flybridge has a single seat for the helm to starboard with a large U-shaped lounge and table to port. There’s also a bar with a fridge and an optional galley.

The foredeck has three large side-by-side sun pads, while aft there’s L-shaped seating across the transom and up the port side, leading to an access gate. The electrically controlled fold-down terrace is across to starboard.

The galley is aft, to port, in the salon, with seamless access to the cockpit, and a large U-shaped sofa with a table are forward. The helm is to starboard, with a large door that opens to the recessed side deck for docking. The helm has dual GPS screens, while the Yamahas are paired to a joy stick for low-speed maneuvering and an autopilot. A generator and a Seakeeper gyro-stabilizer are options.

Below, the owner’s cabin is forward, with a walkaround bed and an en suite head and shower. Two guest cabins are a bit aft; each has two berths, and they share the second head and shower.