Seakeeper just launched its new Ride, a boat-leveling system that eliminates up to 70 percent of a boat’s pitch and roll underway on boats up to 35 feet.

Seekeeper is calling Ride a Vessel Attitude Control System; it uses two controllers that are mounted on the transom below the waterline and generate lift by intercepting the flow of water as it leaves the hull. They use proprietary sensing to measure how the boat is behaving and then deploy rotary blades to counteract the boat’s pitch, roll and yaw.

They are different from trim tabs or vertical interceptors. The Seakeeper’s rotary blades make 100 adjustments each second to combat wave motion. They even adjust the angle of the boat in a turn.

The idea is that the system predicts wave motion before it’s felt on the boat. It requires just 7 to 10 amps for operation, and the drivetrain is completely sealed in a dry and greased environment; there’s no mechanical exposure to seawater. 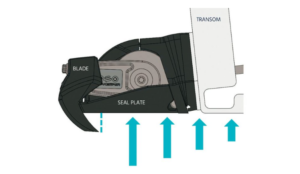 The system can be mounted on new or used boats and it’s easy to use. Seakeeper has formed partnerships with Chris-Craft, Scout and Sportsman boats so those companies will produce models with Ride as standard equipment.

Seakeeper made a name for itself when it introduced its first gyro stabilizer for boats in 2002. They now are on thousands of boats around the world. I have used them on many boats, and have always been impressed.

Now, Ride is designed to introduce another fundamental change in making boating enjoyable.  “The Seakeeper Ride system is the next thing in boating,” says Ron Berman, Chris-Craft’s VP of engineering. “In my years in the industry, I have never experienced a system that improved the ride, handling, and predictability of operating a boat the way Seakeeper Ride does.”

Read more at https://ride.seakeeper.com/how-it-works/ and see the video below.