You are at:Home»On Watch»Grand Banks Launches New Eastbay 60 in Newport

GB Marine Group just introduced its new Eastbay 60, an elegant, three-stateroom sedan with the company’s patented V-Warp hull and a top speed of 38 knots, at the Newport show.

The new cruiser is the eighth model in the line since Eastbay launched its first boat, an Eastbay 38, in 1993. That boat had a C. Ray Hunt hull. Now all of the yachts in the GB Marine Group – Grand Banks, Palm Beach and Eastbay – have the V-Warp hull for comfort, range and speed. And they are all made at the rapidly expanding GB Marine Group yard in Malaysia, where they’re trying to hire 400 more workers.

GB Marine Group views Eastbay, with its Downeast heritage, as an iconic brand, with the new 60 continuing its tradition of craftsmanship and cruising performance. It says the 60 is the best Eastbay yet; it’s also the best performing and most quiet Eastbay yet. (Eastbay’s most popular model is the 38; they’ve built 130 of them.)

Mark Richards, the offshore sailboat racer who has been the head of the GB Marine Group since 2014, said in a statement that the 60’s hull “focuses on efficiency, maximum comfort and a soft ride” that’s also “nimble and responsive.” 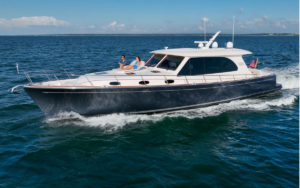 Richards has won the grueling Sydney-Hobart race a record nine times, and he uses that experience to build lightweight, strong and well-balanced motoryachts with a low center of gravity. He started Palm Beach Motor Yachts in Australia in the early ‘90s and built his first powerboat, the Palm Beach 38, in 1999.

The original V-Warp hull was designed in collaboration with Dovell Naval Architects and tested at the Australian Maritime College in Tasmania. It has a significant deadrise amidships that flattens out going aft for a cushioning effect. The hull is slippery and runs fairly flat without having to push a lot of water out of the way; it’s highly efficient across the speed curve and leaves behind a minimal wake. Richards also believes in high-tech construction, using vacuum infusion techniques and a lot of carbon fiber.

I stepped aboard the new 60 in Newport via its large, teak, swim platform and found a surprise. A hatch on top of the transom lifts up to reveal a grill, sink and storage space. In the cockpit itself, there’s a control station forward on the port side, while a settee sits across the transom with a high-low table on a serious stainless pedestal. You can move two side chairs around for flexible seating.

Steve Fithian, a company sales representative, opened a large hatch leading to the lazarette and then, through a door, the engine room. This boat has the optional twin 900-hp Volvo IPS1200 pod drives, and the engines are placed a bit farther forward than usual for balance. 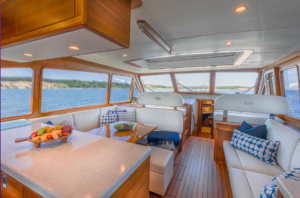 Two sun lounges are on the foredeck, while there’s a two-person sunken seat all the way forward, a novel and inviting space to enjoy the view or raise a glass of wine in the evening.

The interior is filled with satin-finished teak; the fit and finish are elegant. The galley is aft on the port side of the salon; an electric window on the aft bulkhead can be lowered to connect directly to the cockpit and provide more fresh air to the salon. A large sunroof forward provides even more.

An L-shaped settee with another teak table is to port; an ottoman serves as another seat. A straight settee is to starboard. Forward, there’s a two-person navigator’s seat on the port side and a larger helm seat to starboard. Windows all around provide excellent sight lines.

The new 60 has three cabins and two heads below. The master stateroom is on the port side with a walkaround king berth and a walk-in closet aft with drawers. The en suite head is appropriately yacht-sized. The VIP cabin is forward, while there’s a creative third cabin to port, with one berth situated fore and aft, and then, down a step, another berth running athwartships; this cabin houses the standard washer and dryer.