You are at:Home»Ft Lauderdale Boat Show»Report from FLIBS: An “Incredible” Success

The five-day Fort Lauderdale boat show, billed as the largest in-water boat show in the world, is now in the rear-view mirror, and it was a resounding success.

Despite its massive numbers, about 1,000 boats from megayachts to 9-foot RIBs and some 100,000 visitors, I always think of the Lauderdale show as fun. It usually has more superyachts than most other shows, and it has more over-the-top toys and yachting accoutrements than other shows, and this year was no exception.

When the show opened, for example, I visited with Roy Heijdra, the marketing manager for U-Boat Worx, the Dutch company that was exhibiting its new NEMO personal submarine for the first time in the U.S. He said the NEMO was “a perfect fit” for the American boating market, ready to deploy from a large yacht or from the back yard of anyone with waterfront property. And the price tag was just $545,000.

A bit later, I walked down the Bahia Mar face dock and passed a Sikorsky helicopter next to a superyacht with a helipad. It did not have a price tag, reminding me of the old saying that “if you have to ask….(you can’t afford it).” The Sikorsky was just a few yards away from the Ferrari exhibit. 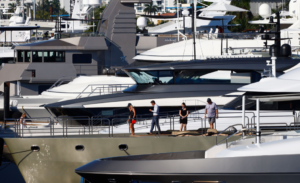 But the show was also a major success for those of us who live in less rarefied air. Indeed, Dave Foulkes, the CEO of Brunswick, said that “Brunswick had an incredible show, setting multiple records and gaining market share.” Sea Ray, he said, had a 33 percent increase in revenue, and a 17 percent increase in boats sold, compared to last year’s show. (Those numbers reflect the ever-higher price of new boats.)

I was concerned that the economy, with the lagging stock market and rising interest rates, persistent inflation, and global uncertainty (the war in Ukraine, problems with China) might affect the boating market. But a friend who was displaying his 70- and 80-foot yachts, told me, “It’s not like other times when the market was down; 2008, for example. The stock market, interest rates, inflation, those problems hit the market for boats under three-quarters of a million. But our buyers are still there. It’s like the first six months of Covid, when people with high net worth decided they wanted to enjoy their lives now. Our order book is full.”

Another yacht builder said, “The basic demos are in our favor. There are more and more millionaires and billionaires every year. That’s our market.”

I did get a touch of reality from Jonas Gothberg, the director of Nimbus boats made in Sweden. He said when the Ukraine war started, he called the Nimbus dealer in Kiev to ask how he was faring. “He said he wasn’t interested making boat sales,” Gothberg said. “He was making Molotov cocktails.”

The energy level throughout the show was almost palpable. The tents and the docks were full. I climbed on a new Nordhavn 60 in the middle of the day. Six people were in the pilothouse, while another half dozen were on the flybridge. The 60 is a popular size for Nordhavn and for blue-water cruisers. At 8.25 knots, it has a range of 3,000 nm.

Both would-be buyers, and people who were just seeing their new boats displayed at the show for the first time, were a happy group. I chatted with the new owner of a 65-foot Vicem on display. He was incredibly proud of the boat’s exquisite woodwork. “Look at the toe rails,” he said. They actually tapered gently as they ran aft. “That’s beautiful,” he said. He was absolutely right, Read more: