Pearl just unveiled its new 72 at the Fort Lauderdale show, with some creative touches inside and out.

For the interior, the new Pearl has the equivalent of two master staterooms (so nobody feels like a second-class citizen), while the exterior, by Dixon Yacht Design, has Pearl’s supersized raked windshield, deep cut-outs in the bulwarks to open up the views from the salon, and one long piece of glass that replaces windows in the hull sides.

It also has a large garage that is revealed when the transom lifts up. The garage is large enough to  hold an 11’ 3” Williams jet tender and a jet ski at the same time.

The aggressive lines seem to suggest that the Pearl 72 is always moving forward, and it is fact not a slouch. With standard twin 1,400-hp MANs, it has a 32-knot top speed and a 25-knot cruising speed. Optional twin 1,600-hp MTUs boost both of those numbers a bit. 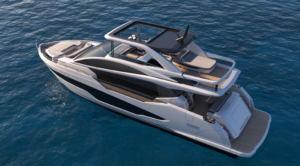 The accommodations deck is a bit unusual. The master is forward, with a private entrance, and the bed is centered and facing forward, with lots of walking-around space on both sides. The second master, as the company calls it, is full-beam amidships, where masters are usually found on a yacht this size. It too has plenty of space. Two more cabins are set between these two masters; one on the port side has a double bed, while the second one on the starboard side has two single berths.

The interior of the Pearl 72 was designed  by Kelly Hoppen, CBE, who wanted it to have the vibe of a cool New York City apartment. The yacht has lots of onyx marble and contrasting metal details throughout.

A large sun pad/lounge occupies most of the foredeck, while the aft deck has an even larger sun pad/lounge over the garage. The flybridge has two seats facing the helm on the starboard side, with a large dining table, bar and lots of sun pads. A hot tub is optional. The flybridge is covered by a hardtop that has three settings: Full shade, half-open, or full sun.

Pearl is a British company. The yachts are made in China.