The Bronson comes with a back story. The CEO of Steeler is a big fan of Charles Bronson, the American tough-guy actor. In 2008, he wanted to spin off a new company, making tough, aluminum-hulled luxury cruisers, and Bronson Marine was the result.

The Bronson 50 is a typical Dutch design; the lines were drawn by Vripack. It has high bulwarks and deep side decks for safety. But it also has a reverse bow and a tall raked windshield for a modern touch.

The boat has two staterooms below and it can sleep six, with two on a convertible sofa. Standard power is twin 600-hp Volvo IPS800 pod drives, producing a top speed of about 37 knots. Twin 700-hp IPS900s are optional. 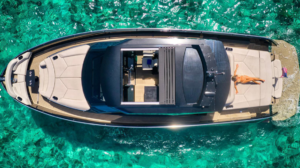 The large sun bed and lounge on the foredeck, and the even larger sun lounge aft, are to be expected, although they are luxurious touches on this boat. But the Bronson 50 has some surprises, including a sliding glass panel in front of the helm that protects the galley and lounge area below.

For fresh air, the panel moves forward to open a space under the windshield. When it’s closed, it provides a lot of natural light to the lower deck, which has a central lounge with the convertible sofa, a galley with two fridges and a freezer, and a forward cabin plus a second one with a double bed that’s tucked under the helm deck.

The helm deck is filled with lounges and tables; ten people can sit here, sheltered from the weather. A large fabric sun roof opens at the touch of a button. Push another button and the entire hardtop lowers so it seals against the top of the windshield for protection.

All the way aft, the sun pad can be raised to reveal a storage area large enough for inflatable SUPs or kayaks or a small RIB. You also could configure this space for a Jacuzzi.

Read more at http://bronson-marine.com and see the video below: