The updates include many trends that American owners have desired on their yachts in recent years. Outer Reef has been making the 650 for more than a decade, and Jeff Druek, the builder’s president and CEO, said they considered feedback from existing and potential owners before re-engineering the 650.

Many of the changes have already been incorporated in the Outer Reef 700 Classic, one of the company’s most popular models. But some owners prefer a slightly smaller yacht than the 700 for a variety of reasons: It’s a bit easier to handle, they may have slip restrictions at their home base or when cruising, and there’s always a savings in everything from maintenance to insurance.

One of the major changes in the redrawn 650 is a larger galley with an open layout. This has been a growing trend among American owners for the past few years. People want a galley more like their large kitchen at home, which is often a family gathering space; the cook doesn’t want to be isolated in a separate area. The 650 will also have more refrigeration for the galley and for entertaining on board.

The new boat will have a day head on the starboard side of the main deck. This too is a nod to the goal of making life on board comfortable and easy, whether at the dock or underway. 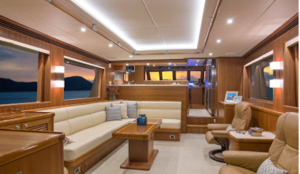 A fiberglass staircase to the flybridge will replace the stainless steel ladder on the previous 650. The staircase offers a much safer, and more comfortable, way to reach the flybridge, particularly for older owners or children, but it provides a better route for everyone. Other boats down to the 40-foot range have adopted such staircases recently.

And the new 650 will have a more comfortable layout for the crew/guest cabin aft, with an internal staircase for privacy. Druek said that, “Ultimately, as an owner-operator without crew, the new 650 design transformation has created a four-stateroom, four-and-a-half head yacht.”

The Outer Reef 650 is an impressive cruiser with a choice of power providing a top speed ranging from more than 15 knots to more than 19 knots. The stand-up engine room includes two sea chests, fuel-polishing and management systems, and major acoustic insulation. A Side-Power bow thruster is standard equipment.