Sirena Yachts just announced plans for their new 48, the smallest Sirena yet, at the big Düsseldorf show. It is scheduled to be launched in time for the Cannes Yachting Festival next September.

In the announcement, the Turkish builder said the new 48 is designed as its entry boat; the Sirena fleet now has a 58, 68, 78 and 88. The company says the 48 “will appeal to a new generation of boaters and marine enthusiasts.”

It’s designed by Germán Frers, the acclaimed Argentina naval architect, who also has worked on the larger Sirenas. It has three cabins  (sleeping six) and two heads, plus an optional crew cabin for one person with its own head. And it will have the same attention to detail and finish as the larger yachts.

The 48 will have a semi-displacement hull for longer cruises, with the ability to cruise on plane for more speed. The hull has lots of volume to create a comfortable interior for family cruising. Power comes from twin 480-hp Cummins or twin 550-hp Volvo diesels. 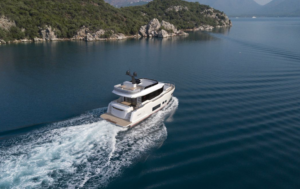 And it will offer some options, often depending on whether owners plan to run the boat themselves or hire a crew. The basic layout calls for an open plan with a traditional aft deck leading to the swim platform. Owners can choose a storage cabin aft, instead of the crew quarters, and a full-height door instead of a seating area that opens out of the transom.

The basic flybridge consists of a spacious entertaining area with tables and seating for al fresco dining, an upper helm station, and large sun pads forward.

“This expansion into the 40-foot sector will complete our lineup in the most competitive area of the market,” said Ali Onger, the CCO of Sirena Yachts. “The Sirena 48 is a model that can be used without crew, yet it can easily accommodate a family nucleus. This will be an all-weather yacht with many innovative warm-water features. We expect it to be especially popular in both the Mediterranean and U.S. market.”