You are at:Home»Cruising Life»Nordhavn 62 Owner James Ellingford Completes First Leg of Circumnavigation with His Family, Writes New Book, and Details the Real Costs of Cruising 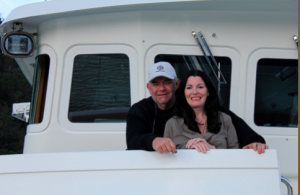 James Ellingford, a retired Australian business executive and avid cruiser, doesn’t like to live a humdrum life. Indeed, six years ago, when he decided that he and his wife would take on a circumnavigation, he wrote, “Normality in every sense for us is, in a word, boring.” Ellingford certainly is a man who lives by his word. He has already cruised from Sydney to Seattle on his Nordhavn 62 with his wife and two daughters on the start of that circumnavigation; he’s just published his second cruising book, “Cruising Conversations, A Million Nautical Miles and Counting,” and on his blog he’s also recorded the exact cost of his own cruising (see budget below). Spoiler alert: Last year that amount was $329,294.

Ellingford, who holds a doctorate in management, has always loved boats; he’s owned a Bertram 25, a Magnum 35 and Riviera 46, running out of Broken Bay, about 20 miles north of Sydney. But then he retired when he was 42 and wanted to do some serious cruising. In 2011, he bought Pendana, a 2001 Nordhavn 62, in Palm Beach, Florida, and had it shipped home. He wrote his first book, “From Family to Crew,” about the first year of cruising off Australia with his wife, Claire, and their daughters, Abigail, now 16, and Bianca, now 13, and two older daughters from his first marriage.

And then he left on April 2015 with Claire and their two daughters on what they planned as a six-year circumnavigation. They’ve already crossed the Pacific and cruised up to Alaska, where he says his all-time favorite spot is Prince William Sound, just east of the Kenai Peninsula, south of Anchorage. The boat is now in Seattle. Their longest leg so far: 2,152 nm from Hawaii to Kodiak, Alaska, which took 11-plus days. (Pendana has a range of 3,000 nm.)

The new book, “Cruising Conversations,” consists of Ellingford’s interviews with other long-range cruisers, mainly other Nordhavn owners, and their real-world experiences, good and bad. It’s 356 pages, with 150 pictures, and a forward by Dan Streech, the CEO of Nordhavn PAE. It costs $49.95 on Amazon and Createspace.com.

In keeping with his idea of sharing real-life cruising with his readers, Ellingford has published his own cruising budget for every year starting in 2012 on his blog. Take a look below, and remember that these figures are all in Australian dollars. Last year’s total of $427,992 Australian converts to $329,294 USD. 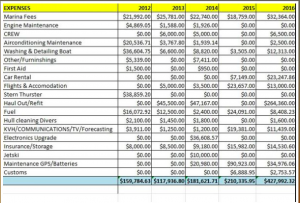