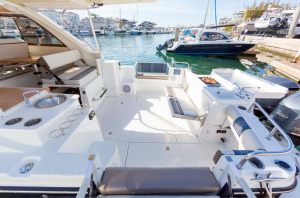 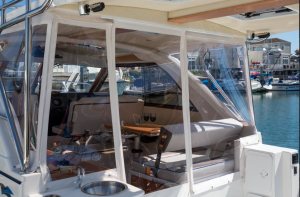 We first wrote about the new Cutwater 302 when it was launched (last Dec. 14), but now the boat’s in the water, with a video, and it’s even more impressive than we had thought. Indeed, its 50-mph speed, driven by twin 300-hp Yamaha outboards and Cutwater’s double-stepped hull, is eye-opening, and its overall creative engineering and out-of-the-box thinking offer more living and entertaining space on board than you can find on much larger boats.

The largest in the Cutwater fleet, the new 302 is a two-cabin, one-head pocket cruiser that actually can sleep six (with two on the convertible dinette). And, with its cockpit that seems to grow bigger with every seat you extend from the gunwales or the transom, it can hold a small crowd at the dock or for a day’s outing.

I know a bit about cruising on a Cutwater, since I drove a Cutwater 28, with George Sass, Sr., the photographer, from New York City to Quebec City in the summer of 2014, spending six days on the boat. We cruised up the Hudson, across Lake Champlain, up the Chambly Canal and down the St. Lawrence, usually in the 16-knot range; it was one of the most enjoyable cruises I’ve ever had. I’d love think about this on a boat that’s just two feet bigger, but incredibly faster when you need to outrun a storm or just get the adrenalin pumping a bit.

The new Cutwater 302 comes in two models, the Coupe, with a built-in bulkhead and door separating the salon from the cockpit, for an all-equipped-for-cruising price of $309,937, and the Sport Coupe, without the bulkhead (so the salon is open to the cockpit) but with canvas that can be dropped down for an enclosure, for $304,937. Bow and stern thrusters are standard on both. Like all Cutwaters, the 302 can be trailered, to open up new cruising destinations.

Take a look at the boat here, particularly all the features in the cockpit, and its running attitude on the water: