You are at:Home»On Watch»After 5,000 Miles and One Major Mishap, John Hauck, 80, Approaches Chicago on the Great Loop, Solo Once Again, on Grumpy 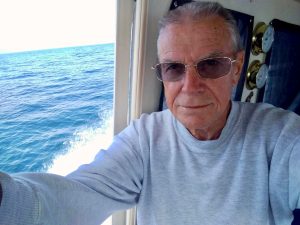 When we last checked in with John Hauck, the 80-year-old retired Army major and special forces helicopter pilot who is doing the Great Loop on his own, he was down on the Gulf Coast of Florida. That was two months ago. Since then Hauck has driven Grumpy, his 2003 Rosborough RF-246, around much of the Loop, and he’s now near Chicago.

All told, Hauck writes from St. Joseph on the eastern shore of Lake Michigan, just 60 miles from Chicago, that he has spent 99 days and put more than 5,000 miles behind him since he left Demopolis, Alabama, on April 15. And he is once again, as he started, on Grumpy by himself, although he was joined for a few weeks by a lady friend.

The trip has not been without mishaps. Indeed, on his Day 43 on the Loop, Hauck hit the submerged Pea Patch Wall near Wilmington, Delaware, taking out the lower units of his two 150-hp Mercury outboards.  “The wall is famous for destroying lower units and more,” he wrote on his Facebook page, Grumpy Does the Great Loop 2019. “I am the third boat to hit it today.” The repairs set him back 17 days. “Had a lot of time to think about the accident and some things will change in my operation of the boat,” he wrote. “Primarily, keep ‘er between the green and red in the center of the channel.”

Back on the water, he had a “wild and wooly” ride down Delaware Bay, and got up to New York in fog, rain and then pea soup fog, anchoring overnight behind the Statute of Liberty. The next morning, he wrote, he “was glad to get out of there. It is a huge, busy place. Local commercial traffic keeps the harbor stirred up and the water rough and confused. Soon as I cleared NYC the Hudson River opened up and I felt at home again surrounded by hills and trees. The river is beautiful, much more so than I ever imagined.”

Up the river, Hauck, who joined the Army when he was 16 and flew a Cobra helicopter gunship during the Vietnam war, passed West Point, and wrote, “it is a gloomy, fortress-looking place. Don’t know if I could have handled four years-plus there or not. Six months of Officer Candidate School at Fort Benning, Georgia, was plenty for me.”

From there, he went through the Erie Canal, was joined by a lady friend from home for a few weeks, and cruised  past Detroit, up to Mackinaw and, after several weather delays (water was cascading over the breakwall in Petoskey), down Lake Michigan to St. Joseph. When he got to St. Joe, he said, “the lake is flooding all around me.” And he was making plans for the last leg of the trip, going through the lock in Chicago and then in the river system back home.

“I’m a little anxious to get home and start a new chapter,” Hauck wrote, “but not really anxious to end this fairy tale journey. Sometimes I have to pinch myself when I think of where we have been, what we have done, and the wonderful people we have met.”