You are at:Home»Cruising Life»7 Great New Power Cruising Boats at the Newport Show

About 340 boats will be on display at the Newport International Boat Show, which runs from Thursday, Sept. 12, through Sunday, Sept. 15. But only a handful will be new cruising powerboats that are being shown in the U.S. for the first time. Here’s a look at some of them:

Bruckmann Abaco 47 (pictured above):  Built on the success of the popular Bruckmann Abaco 40, the new 47, designed by Mark Ellis, is a classic Down East cruiser with a long sheer, low profile, sharp entry and raked windshield. Built for extended cruising, the innovative hull is designed to plane at 11 knots and reach a top speed of more than 30 knots. It has two cabins and two heads.  Bruckmannyachts.com 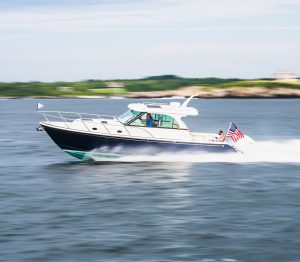 Hinckley Sport Boat 40x: Designed by the legendary C. Raymond Hunt Associates, the new Hinckley epress sport boat was designed specifically for outboard power. It has a 23-degree deadrise at the transom to cut cleanly through rough water. Powered by three 300-hp Mercury Verados, it has a top speed of about 47 knots. Coming from the Down East company that invented a genre when it introduced the Picnic Boat in 1994, the elegant Sport Boat has two cabins and one head below to make cruising effortless and comfortable.   http://hinckleyyachts.com

Maritimo X50: Designed by the highly regarded Australian builder, the Maritimo X50 has a low profile, race-bred hull and innovative “beach club” cabin aft. That space is possible because the boat’s twin 670-hp Volvos are positioned forward to provide a lower shaft angle and create a better balance through the speed range. The X50 has a full-beam master below and a guest cabin forward, both with en suite heads and showers. The beach club can be set up with a wet bar and fridge, occasional chairs and a table, or as an extra stateroom with two single berths or as a tender garage. http://maritimo.com.au 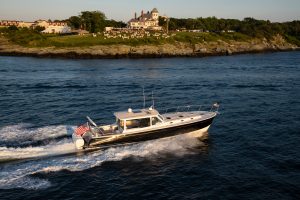 MJM 53z: Designed by Doug Zurn, the 53z is the flagship of the MJM cruising fleet and is powered by four 400-hp Mercury Verados, reaching a top speed of 51.1 mph. A luxury boat with MJM’s traditional seakeeping abilities, the 53z handles like a sports boat but provides comfortable cruising with two master suites below and a climate-controlled bridge deck. We tested the 53z in Newport recently with MJM founder Bob Johnstone, who said, “There are two things about this boat. Performance and comfort.” He’s right on both counts. The Seakeeper gyro keeps the boat steady, and it’s user-friendly, with side doors cut into the hull so you can board easily. http://mjmyachts.com

Nimbus T11: A new entry from Sweden, the Nimbus T11 is a 40-foot combination of a walkaround day boat and a family cruiser with two staterooms and one head below. Standard power is twin 300-hp Mercury Verado outboards, with a top speed of 40 knots; three 300-hp Verados deliver 50 knots. The helm station has three seats; the galley is aft of the helm and the boat can hold a dozen people, with some on the aft deck cockpit and a forward lounge. The seating is flexible, and the boat is built for speed and seaworthiness.   http://nimbus.se

Prestige 420: An upscale, contemporary French-styled cruiser, the Prestige 420 Fly is powered by twin Cummins diesels, giving it a top speed of 30 knots and a range of 210 nm at its cruising speed of 22 knots. The two-stateroom, two-head Prestige is filled with light woods and warm colors. The salon has large side windows and sliding glass doors aft, and there’s enough seating, lounging and sunning areas on the flybridge, the cockpit and the foredeck to hold a crowd. The boat has fingertip joystick controls to make low-speed maneuvering and docking easy. http://prestige-yachts.com 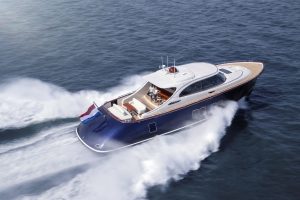 Zeelander 72: A modern, 40-knot Dutch masterpiece, the Zeelander 72 is the new flagship of the Zeelander fleet. The low-profile cruiser has a more sporty look than previous Zeelanders, with a large wraparound windshield, a reverse transom and gorgeous tumblehome. The teak swim platform, all 100 square feet of it, folds out from the clamshell transom to create an enormous beach or lounging area. The garage is on the starboard side. On a recent test off Newport, I realized that the Zeelander 72 was one of the most solid and smoothest-riding boats I’ve ever been on. Powered by three 1,000-hp Volvo IPS1350 pod drives, it topped out at 40.4 knots. http://zeelander.com