You are at:Home»Cruising Life»New Porsche-Designed, 35-Knot “Spaceship” Now for Sale 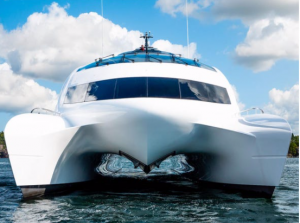 Royal Falcon One, a Porsche-designed, 135-foot, 35-knot “spaceship on the water,” is now for sale. It was launched from the Kockums yard in Sweden earlier this summer, and is now listed by Campers & Nicholsons. The luxury catamaran, with four decks and five staterooms, was built in conjunction with the Royal Falcon Fleet in Singapore; the project took almost a decade.

The head-turning, futuristic yacht is filled with large windows, sliding doors and light flowing in from many directions. It has an open sundeck on the upper deck, and an observation lounge forward on the main deck.

All told, the massive cat has four guest staterooms and a full-beam (more than 41 feet) master with its own private balcony; the master also has its own private dining area. Two crew cabins are in the hulls.

Studio F.A. Porsche said it was given the brief to design a unique boat, one that did not look like any other ever built. The designers started with a clean piece of paper, except for one stipulation: the boat had to be a catamaran. The idea was to replicate the space available in a 210-foot monohull in the new smaller cat.

The Porsche studio said the resulting design was meant to represent speed and dynamics. The two hulls were designed to create an impression of a stance, like the track of a sports car. When it was completed, the head of the Royal Falcon Fleet described it as the spaceship on the water.

You can get a tour of the boat in the video, below: