You are at:Home»Boat Reviews»Prestige Announces Groundbreaking New X70 at Dusseldorf 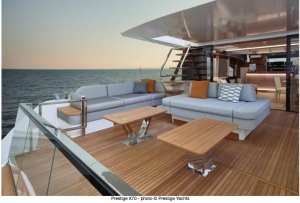 Prestige just introduced a groundbreaking new X70 cruiser at the Düsseldorf show, representing a major departure for the French builder.

The new 70 is the first in Prestige’s X series (joining the yard’s Flybridge and S series) and it offers some new ideas about how to use and maximize space on board. The X70 does not have traditional side decks, for example. The side decks that usually are on the main deck level are up top, on the flybridge level, on the X70.

And the flybridge is not a traditional flybridge, either. In addition to the walkaround area, it has four separate staircases, so it can be accessed easily from other parts of the vessel.

Then there’s the cockpit (pictured above); it’s full beam, as is the salon, and it’s supersized, with lots of room for lounges and social areas. It is much larger than the cockpit on other Prestige yachts, and it flows directly into the salon, blending the interior and exterior spaces. The interior is filled with light; some of the opening windows are six feet wide.

All the way aft, the beach club is integrated into the swim platform for another social or entertaining area, but with immediate access to the water.

In designing the X series, Erik Stromberg, Prestige’s director of product marketing, said, “We started with the notion of creating your own private island.”

Below, the master stateroom is full beam, and is accessed from the main deck by a private staircase. Owners can choose a layout with two or three cabins forward, accessed by another staircase, with the option of a crew’s quarter aft, instead of the beach club.

Hull number one of the X70 is currently in production. It is scheduled to be launched at the Cannes show in September, and then debut in the U.S. at the Fort Lauderdale show later in the fall.