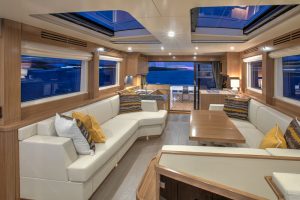 The new, low-profile Sirena 58 Coupe just made its debut at the Miami yacht show, and the boat was made for the American market. It is the little sister to Sirena’s 58 flybridge, the most successful yacht in the Turkish builder’s fleet, and it was designed for buyers who said they wanted an “express” type boat with lower air draft for coastal cruising in the U.S. or even for cruising on the Great Loop.

“This yacht is for anyone looking for a sleeker exterior profile or for couples who prefer not to have a flybridge but do admire the build strength and design details in Sirena’s existing 58,” said Constantinos Constantinou, Sirena’s North American sales director.

The 58 Coupe, designed by Germán Frers, has Sirena’s trademark plumb bow and modest freeboard, with wraparound windows in the salon. The interior was designed by the highly regarded Italian Design Studio Spadolini.

The boat’s semi-displacement hull has hard chines for a combination of superior performance and stability throughout the speed range. It is powered by twin 650-hp Cats, producing a 27-knot top speed and a cruising speed of 16 knots. At 10 knots, it has a range of 850 nm with a 10 percent fuel reserve. With optional 850-hp Cats, the top speed rises to 30 knots. The Sirena carries a Category A designation, attesting to its strength and seakeeping abilities.

The standard Sirena 58 Coupe has three staterooms with three heads, plus an optional crew cabin with its own head. The main deck is all one level, from the transom to the helm station. Four panel doors open wide from the aft deck to the salon. The galley is full beam aft, a sofa is on the port side with a table, and a larger sofa is to starboard. There are windows all around, and two optional sliding sunroof panels let in even more natural light.

Sirena offers several possible layouts below, but this one has a unique owner’s stateroom forward. It’s really a bi-level suite, with access to the salon and a private entrance to the lounge on the foredeck. Another option is to have two master suites below, so that guests can feel just as pampered as the owner.

Constantinou says “For customers who don’t need a flybridge, this coupe version of the 58 offers the best of both worlds: inside-out living and incredible flexibility, both in the accommodations spaces as well as in the yacht’s overall performance.”