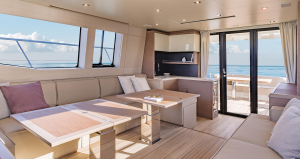 The Monte Carlo 6 is designed by the highly regarded firm of Nuvolari and Lenard, and it features large open spaces that you’d expect on a much larger yacht. The flybridge is particularly spacious, and it’s meant to be the major living and relaxing area on board.

Most notable up there is a large U-shaped lounge on the port side that can seat 10 people with an expandable table on two stainless steel platforms. Sun lounges are aft, and the hardtop has an opening sun roof.  The flybridge also has a small galley for entertaining. The single helm seat is forward to starboard; a two-person seat is opposite to port.

The swim platform has two fold-away brackets to support a tender, and it can be lowered hydraulically. A galley with a barbeque and sink is built into the back of the transom, so you can cook up a picnic standing on the swim platform. There’s also a crew quarter accessed from the swim platform; some owners prefer to use this space as a wet head.

The cockpit/aft deck has lounge seating with a table aft. Two large glass doors open to the salon, where the galley is aft on the starboard side, equipped with a fridge, dishwasher, microwave and optional wine cellar (this is a French boat, after all).

The Monte Carlo’s interior is open, light-colored and filled with natural light from windows all around. It has lots of clean, straight lines that won’t go out of style. A long sofa with two tables is on the starboard side; a single settee is to port. The helm station, with a Besenzoni chair and armrest controls, is centered.

Below, the VIP stateroom is forward with a large single berth and an en suite head and shower. A guest cabin is a bit aft; it can be outfitted with two berths or a queen; it shares the day head. The full-beam master stateroom is amidships with a walkaround bed and lots of storage. It gets natural light on both sides from Monte Carlo’s signature round hull-side windows. And it has separate head and shower areas.