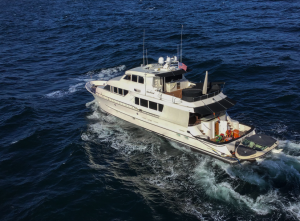 Going Coastal, a 92-foot Paragon Motor Yacht, just sank nine miles south of Monterey, California, despite the Coast Guard’s efforts to keep it afloat. The Coast Guard rescued the two men on board, who were not injured.

The Coast Guard reports that the Going Coastal crew made a Mayday call at 11:45 a.m. on Channel 16, saying the yacht, built in Taiwan in 2006, was taking on water about 35 miles south of Monterey. The Coast Guard dispatched a 45-foot response boat from Monterey and a Dolphin helicopter from San Francisco to help in the rescue.

The Going Coastal crew then radioed that they had the flooding under control, and the Coast Guard cancelled the Dolphin mission. The Coast Guard boat crew arrived at 1:30 p.m. and transferred a Coast Guardsman and a dewatering pump to the yacht (see the picture above). It then started escorting the yacht to Monterey.

About 3:45, however, the flooding increased, and the Coast Guard sent the Dolphin helicopter back. The Dolphin arrived at 4:55 and delivered a rescue swimmer and a second dewatering pump to the yacht. Half an hour later, the yacht lost all power and the flooding continued.

About nine miles from Monterey, the Coast Guard rescued the two men from the yacht before it sank. It had about 1,200 gallons of fuel on board. The owner is working with the insurance company to salvage the vessel. It was powered by twin 1,400-hp Cat diesels and had a top speed of about 17 knots. Read more: