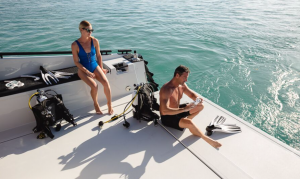 The new DutchCraft 56 is nothing if not versatile. With its spacious, open aft deck, it’s perfect for diving and watersports. And with its luxurious four-cabin, three-head layout below, it’s also inviting for comfortable cruising.

The DutchCraft 56 is made, not surprisingly, in Holland, and it comes in two versions. The DC 56 Open is for warmer climes, while the DC 56 Cabin is made for an extended season.

Either way, it’s made for adventure, particularly for underwater adventure. The aft deck can hold 16 scuba sets, or six SeaBobs, two jet skis, a 17-foot tender, or a mini submarine, among other things. “Take your diving to the next level,” says Sietse Koopmans, the founder and chairman of DutchCraft. “In addition to the surface world, there is a lot to be discovered underwater too.”

The Open version of the boat can seat 36 people, plus all the toys. It also has an optional concealed davit built into the aft deck so you don’t have to lift all the heavy tanks and accessories. For divers, it has a dedicated basin to wash off diving gear.

The boat also has Volvo’s Dynamic Positioning System, so you can push a button on the joystick and the boat will stay put, even in a strong wind or current. This means you don’t have to drop an anchor, which is often prohibited in areas with sensitive coral reefs.

Koopmans, who’s cruised around the world, also is the founder of Zeelander. He knows how to make upscale cruising boats. The galley on the DutchCraft 56 is designed for living onboard. It has a dishwasher, a freezer, two fridges, an ice maker – and a wine cooler. The galley is on the accommodation deck, with the staterooms; they all have extra headroom to provide an extra sense of comfort and space. The master is full-beam amidships; it has a 70-inch TV.