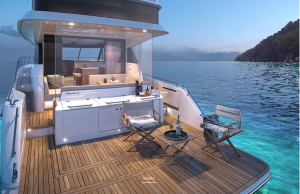 Maritimo just announced that it’s building a new 55 motoryacht with a climate-controlled, fully enclosed skylounge flybridge. The latest addition to the Australian builder’s M Series of long-range, blue-water cruising yachts, the M55 Flybridge is scheduled to be launched early next year.

The new Maritimo 55 Flybridge has three cabins below, a popular aft galley in the salon, and an ever-expanding “adventure deck” all the way aft that creates a new entertaining and watersports area. It also has Maritimo’s straight-shaft drive, variable deadrise hull, deep keel, and sharp bow entry that have earned the company a reputation for blue-water performance.

“The new M55 long-range cruising flybridge motoryacht fuses the latest advancements in motoryacht technology and design with all the legacy features of the iconic M-Series models past,” said Tom Barry-Cotter, Maritimo’s design director.

Over the years, I have visited the Maritimo factory on Australia’s Gold Coast south of Brisbane, and tested their boats in Australia and the U.S. I have always found them to be first-rate, solid, easy riding and responsive cruisers that are built to take on oceans around the world.

One nice feature of the new 55 is that you reach the flybridge via internal stairs. The helm up there has two matching seats on the starboard side. One seating/lounging area is forward to port, another is behind the helm seats. These seating areas also can be converted to sleeping berths, which would be useful on a long cruise.

The salon has wraparound windows and glass doors aft, and is a major social area with an L-shaped settee to port with a table and a larger U-shaped seating area to starboard. The aft galley can be opened to the cockpit, which is protected by the overhang from the fybridge.

One step down, the adventure deck all the way aft has a bar and entertaining area, with folding chairs and tables. An optional extension can make this deck even larger. The garage already is large enough for a 9’8” tender.

On the accommodations deck below, the master stateroom is full-beam amidships, with a centered king-sized bed, a sofa on the starboard side and a long dresser and drawers to port, plus an en suite head and shower. The VIP cabin is forward with an offset queen bed and a head with shower, and the third cabin, with two single beds, is aft a bit to starboard.