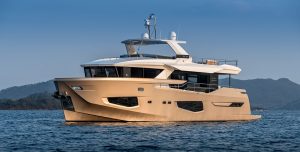 Numarine, the high-end Turkish builder, just had a big day. It launched three of its new 84-feet-long 26XP expedition cruisers in Istanbul, demonstrating the popularity of the model. The company said it now has a total of eight 26XPs out on the water, and three more have been sold and are under construction.

Two of the three new boats have semi-displacement hulls with a bulbous bow. They are powered by two 560-hp MAN diesels have a top speed of 13.5 knots and a cruising speed of 9 knots. At 8 knots, the new cruisers have a range of 3,000 nm.

The third new 26XP is powered by twin 1,200-hp MANs, or more than twice the power of the other two. It also has twice the speed: a top speed of 28 nots and a cruising speed of 18 knots. We don’t have any information about its range.

The new Numarines all have a futuristic design, with large angular windows that let in a lot of natural light. In the salon, a large section of the full-height windows slide open.  The salon also has a C-shaped couch and sofa and a dining area next to the galley. Large sliding glass doors open to the aft deck; it has a separate dining area and an oversized sun lounge. Two steps down lead to the “beach platform,” with easy access to watersports.

On the foredeck, three settees provide a separate private space, while the flybridge holds a second helm station, another dining area, and an open sun lounge aft. Its boat deck is large enough for an 11’ 4” tender.

The Numarine’s interior is spacious, with four cabins below, plus two more for crew. The master suite is amidships, with a king-sized bed, a study to starboard, a lounge to port, and a luxurious head and shower. The accommodations deck also has two matching VIP cabins and a fourth cabin with twin berths.

Numarine prides itself on reducing noise and vibration on its yachts. It says that the noise level in the owner’s stateroom at cruising speed is just 55.1 d(B)a, and only 33.8 d(B)a at anchor with the generator and air conditioning running. (The level of normal conversation is 60 d(B)a.)