You are at:Home»Cruising Life»Dozens of Massive Blue Whales Feasting in the Farallons 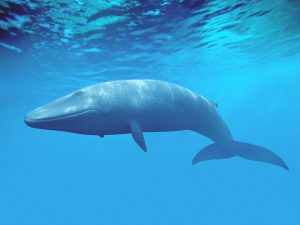 Dozens of blue whales, the largest creatures on earth – ever – have been feeding off the Farallon Islands, about 30 miles west of San Francisco. In one hour-long period, scientists counted 47 of the animals there, the largest group seen in Northern California since they started keeping records in 1968.

Beautiful creatures with backs that seen to shine metallic blue when they surface, blue whales can grow to be more than 90 feet long and weigh more than 150,000 pounds. (The largest ever measured was 98 feet long and weighed 346,000 pounds.) They are larger than a Boeing 737-800 jet airliner fully loaded with fuel and passengers; they generally live for 90 years or so.

Researchers from Point Blue Conservation Science, working in the Farallons, said that spray from the whales’ blowholes was visible in all directions. There were so many blue whales that NOAA asked ships to slow down to 10 knots when cruising through the area; NOAA oversees the marine sanctuary that surrounds the islands.

The whales apparently were drawn to the area by food. Some blustery weather earlier in the month caused ocean upwelling, where nutrients move from the depth to the surface. Krill, the blue whales’ preferred food, have been plentiful. An adult blue whale eats six tons of krill a day.

Blue whales generally move from south to north this time of year. They breed off Costa Rica and the Sea of Cortez in Mexico and move up the coast in the spring, as far as Washington State, before heading south again in the fall.

Blue whales are on the endangered species list. Scientists estimate the worldwide population to be somewhere between 10,000 and 25,000, but even that wide range is below historic averages.

A study in 2017 estimated that 18 blue whales, 22 humpback whales, and 43 fin whales died that year off California, Oregon and Washington after being hit by ships. Read more: