You are at:Home»Cruising Life»Toyota and Yanmar Develop Hydrogen-Powered Concept Cruiser 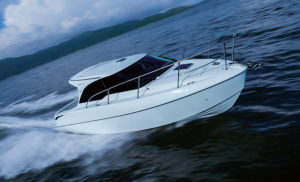 Toyota and Yanmar have joined forces to create a hydrogen-powered, zero-emissions concept yacht. The new boat uses the high-pressure hydrogen fuel-cell from Toyota’s Mirai sedan as its powertrain. The two companies say the yacht will have smooth, emission-free cruising with “a superior cruising range.”

For its part, Yanmar says its goal is to develop an environmentally friendly hydrogen fuel-cell system for a variety of marine vessels. It hopes to install the new H2 system and start demo testing later this year.

The Mirai system is well-proven in the automotive market. Toyota launched its Mirai (which means “future” in Japanese) sedan in 2014. It was the first hydrogen-powered, mass-produced car, with a range of 312 miles, and it cost $57,500 in the U.S. Since then, Toyota has sold more than 6,200 of them here.

Toyota also has worked with Yanmar before. In 2016, Toyota launched the Ponam-28V premium sports cruiser (pictured above), and sold it through a network of 50 dealers in Japan. The boat was powered by the four-cylinder diesel engine from the Toyota Land Cruiser Prado; the hull was developed by Yanmar. Read more: