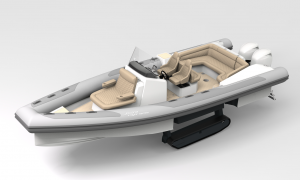 Iguana’s amphibious RIBs made quite a splash when they were first introduced to the United States at the Fort Lauderdale boat show in 2019. And not only in the U.S. So far, Iguanas with deep-V hulls to cruise through the water and tractor drives to climb onto beaches on land, have been tested on all six continents of the world. Now, Iguana is launching a new, improved luxury model, called the Iguana Knight.

After its initial success, said Antoine Brugidou, the French company’s founder and president, “Iguana experienced an unprecedented demand for a more luxurious RIB built to a higher specification. That’s why we launched the Iguana Knight, in order to enhance waterfront properties, support superyachts as a chase boat, or be integrated on board as a tender to a megayacht.”

It’s also designed for anyone who wants a fast (48 knots), safe, stable, blue-water ride without having to bother with a slip or a marina. If you have waterfront property, keep the Iguana in your garage and drive it down to the beach. The boat’s tractors, and a 15kWh electric motor, propel it to speeds up to 4 mph on land.

And you don’t have to get wet, or even touch the water, to climb on and off the Iguana. Push a button and a sturdy boarding ladder deploys from the transom. Once the boat’s in the water, push another button and the tractors retract into the hull.

The new Iguana Knight has a “comfort pack” to make live easy on board. It also has touchscreen electronics, premium upholstery, a V-berth below and a marine head. A convertible top keeps passengers (as many as a dozen at a time) cool and in the shade.  The Knight comes in five colors.

The first Iguana Knight is scheduled to leave the factory in Caen at the end of July.

The Knight is too new to have a video yet. But you can see the earlier model of the innovative RIB below: