Vripack, the highly regarded Dutch yacht design studio, just announced the building of a new Doggersbank 66 Offshore pocket explorer. The new Doggersbank is under construction at the Altena yard, also in the Netherlands, and is scheduled to be launched at the end of 2021.

Vripack designed the yacht for a family of experienced sailors who are transitioning into motor yachts. Doggersbanks, with their iconic high bow, are rugged offshore vessels, made for long passages at sea. They were first designed by Dick Boon, the founder of Vripack, in the 1970s, and are named for a sandbank in a shallow area of the choppy North Sea; more than 700 have been built so far.

At 66 feet, the new boat is one of the smaller Doggersbanks, but the owner wants to run the boat himself with his family as crew. The family has owned several Vripack-designed commercial boats in the past, “so they know everything about the seaworthiness and comfort of a proper boat,” says Bart Bouwhuis, the Vripack co-creative director. “That’s why they immediately connected with the Doggersbank brand and the robust pedigree of this pocket-sized explorer.”

“Doggersbank is like the Leatherman of Swiss army knives,” Bouwhuis said. “It’s solid, rigid and highly engineered, and ready to perform in any condition. The Doggersbank has long been recognized as a reliable, Dutch-designed and engineered Dutch-built yacht.”

Two seats face the helm on the flybridge. An L-shaped settee and table are to port, and a large sunbathing area with lounges is aft. The boat deck is all the way aft.

On the lower accommodation deck, the master stateroom is full-beam amidships, with a centerline bed and a settee on the starboard side. The master head, with a separate shower, is large and home-like. The VIP stateroom is forward, with an en suite head, and a smaller guest cabin is to starboard. 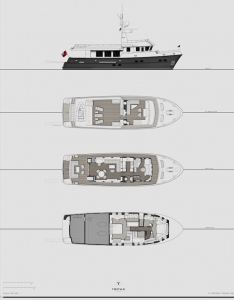