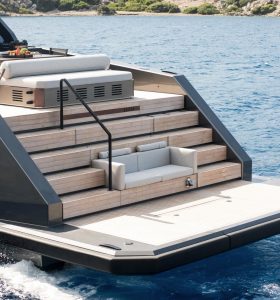 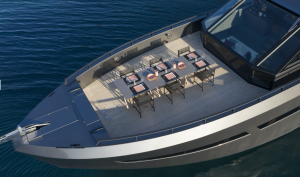 Mazu, the high-end Turkish builder, just launched its new low-profile 82 flagship with aggressive styling, a “bulletproof” windshield and a custom terrace out back. Powered by three 1,000-hp Volvo IPS1350 diesels and pod drives, the new 82 tops out at 40 knots. At its cruising speed of 33 knots, the 82 has a range of 400 nm.

The new Mazu is nothing if not high tech. The hull is made from a light, carbon composite sandwich. The windshield is tempered and laminated. Custom glass windows surround the salon, providing almost 360-degree visibility; they also are cut into the hull sides of the lower accommodation deck, bringing natural light into the three staterooms below.

Designed by Mazu founder Halit Yukay, the 82 extends the company’s lineup that includes 38- 42-, 52- and 62-foot models. The new 82 has custom touches from stem to stern. The recessed foredeck is open for flexible use. It can serve as a dining area, capable of holding half a dozen guests around a table, or as an outdoor cinema, or just for sunbathing.

The aft deck has the usual bar and lounge, but the owner wanted terraced steps leading down to the swim platform wide enough to sit or lie down on. A sofa is integrated into the center of the lower staircase.

The main deck is flush for easy living. The salon has a retractable sunroof; a sofa and table are across from an entertainment center with a retractable TV and a bar.

Below, the master stateroom is full-beam amidships, with a large head and walk-in wardrobe closet. The VIP cabin is forward with an en suite head and shower; a double stateroom is on the starboard side.

The owner has already taken delivery of the 82, and plans to use it as a floating office or home while avoiding the corona virus. The boat is scheduled to make its public debut at the Cannes Yachting Festival, starting Sept. 8.