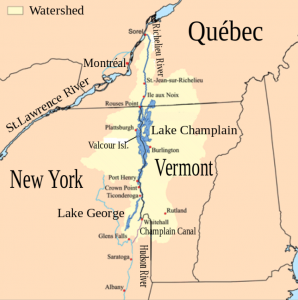 The Champlain Locks are finally open, after a long, coronavirus-delayed repair, and the 125-mile long Lake Champlain, one of the most beautiful spots in the U.S., is now accessible for anyone cruising up from New York or coming east along the Erie Canal.

Whitehall, the last lock leading to the lake from the Hudson River, just above Albany, opened a few days ago; the repairs originally had been scheduled to be finished by the start of summer, but they were delayed by shutdowns caused by the coronavirus.

The good news is that late summer and fall are spectacular times to cruise on Lake Champlain, nestled between two states, with New York and the Adirondacks on the west side, and Vermont, with its Green Mountains, to the east. The province of Quebec opens to Canada on the north. The freshwater lake, with depths up to 400 feet, is a boater’s paradise, with great fishing, cruising and watersports.

Burlington, Vermont, is the main city on the lake, which is largely surrounded by farmland and small towns. Lake Champlain is just 12 miles wide at its widest point, and there are more than 50 beaches and state parks along the shore, and some 90 species of fish in the water.

Lake Champlain is also a history buff’s heaven. It played a pivotal role in the French and Indian Wars, the Revolution, and the War of 1812. Fort Ticonderoga, which is restored, is at the southern end. In 1775, state militias under Benedict Arnold and Ethan Allen captured it from the British (before Arnold changed sides). The lake also was the site of a naval battle in the War of 1812.

In those days, Lake Champlain was a vital passageway from Canada to the U.S., particularly down the Hudson to New York. It is now a wonderful destination in its own right, but it still is a passageway to Canada, with the Richelieu River at its north end leading to the St. Lawrence.

A few years ago I spent some time on Lake Champlain with George Sass, Senior, the photographer, on a Cutwater 28 that we were cruising from New York to Quebec City. We stayed at the Westport Marina at the south end of the lake for a few days, visiting friends. It’s a welcoming, full-service marina with a ship’s store and a lakeside dining room; it’s also just a few minutes’ walk to downtown Westport, New York, a small village with restaurants and shopping. Read more: