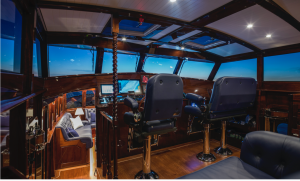 Before we get to the basics, let’s consider some numbers about the elegant new Spirit P70 long-range cruiser.

Enough. You get the idea. The Spirit P70 is a special boat, a very special boat, definitely built the way the owner, an experienced yachtsman, wanted it. McMillan says he “liked the design of our existing power boats, so we combined the flared bow and tumblehome stern from the P40 with the 1930s style of our sailing yachts and applied it to a larger motor yacht design. We added deep bulwarks to allow the guests to move around the deck safely, particularly when underway out at sea.”

The boat is built with a Sapele ring frame, Douglas fir longitudinals, and kaya wood veneers, all bonded together using vacuum-infused epoxy resin.

Starting at the top, the P70’s flybridge has two double Stidd helm chairs and additional seating for six guests. The wheelhouse sits amidships on the main deck, with a double and a single Stidd helm chairs. A raised sofa is to port and a chart table is to starboard.

The salon is down a few steps and forward of the wheelhouse, with a TV, bar, and panoramic views from the forward windows. Separate stairs from the wheelhouse lead to a single day head and an open-plan dining salon and galley.