You are at:Home»Boat Reviews»New Cape50: The Result of One Man’s Passion 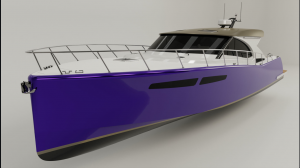 The all-new Cape50, the result of one man’s passion, will be launched in November in Australia, and the aggressive cruiser with a low profile, plumb bow, beautiful tumblehome and reverse transom is built to handle the often-rough seas Down Under.

The Cape50 was conceived, designed and built by Steve Campbell and his company, Composites Construction, outside Melbourne. Campbell has been a master shipwright for the past 30 years; he’s sailed on America’s Cup boats, and he’s built racing sailboats. Since 2009, he’s also built 40 racing ski boats that top out at more than 100 mph.

A few years ago Campbell decided he wanted to make a cruising powerboat for his growing family. The Cape50 is the result.

Powered by twin 440-hp Volvo IPS600 pod drives, the new cruiser is expected to hit a top speed of 34 knots, and cruise at 28 knots. It’s built with vinylester, resin-infused foam sandwich construction for light weight and strength. The cabin top, and even the window frames, are made with carbon fiber.

The Cape50 has a warped plane running surface, so the boat can carve through the water and come on plane without a bow rise. The engines sit near the center of buoyancy, just aft of amidships, with the tanks just forward. The stern is relatively flat to provide stability at rest and underway.

For accommodations, the boat has a master stateroom in the bow with a head and shower, and a guest cabin for two on the starboard side. The salon has a U-shaped sofa along the port side, with the galley to starboard. A custom, composite, double chair faces the helm, which has a carbon fiber dash.

The cockpit has an L-shaped settee along the transom and up the port side; a walkway leading to the swim platform is to starboard. The boat’s decks are teak.