Cutwater is known for its ability to pack a lot of standard features inside and out its boats. The 32 CB has a master cabin forward, with an island bed, LED lighting and a head and shower, plus a private midships cabin for guests or family; two more people can sleep on the convertible dinette in the salon. The boat has a full galley with enough storage space to supply a family cruising vacation.

The cockpit comes with seats that fold out of the bulwarks, reversing seats (meaning they can face forward or aft) against the transom, a grill, sink and fridge.  The swim platform is large (20 square feet) and is built so it doesn’t have any hoses or rigging tubes to trip over.

There’s more lounge seating on the bow, and you could have a small party up top on the flybridge. The helm there is equipped with same Garmin electronics that you’ll find on the lower helm. Bow and stern thrusters are standard.

The boat has a double-stepped, deep-V hull for performance. We don’t  have any speed number yet, but with 600 horsepower and only 10,000 pounds of displacement, the 32 CB should move. The hull is designed so it corners firmly and smoothly.

Built in Monroe, Washington, a bit northeast of Seattle, the Cutwater 32 CB comes ready to cruise in two packages with factory-direct pricing. The Northwest Edition has a diesel forced-air furnace, propane stove and oven, and downrigger plugs and pads, all for $329,937. The Luxury Edition includes a 5kW gas genset, air conditioning, a two-burner electric stove-top, and combo convection oven/microwave, for $344,937. 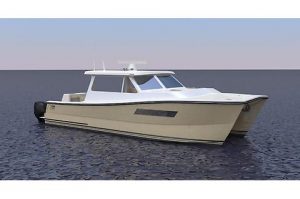 Taking advantage of two trends, the increasing popularity of power catamarans and the explosive growth of outboard power, Cape Powercats is introducing its new 3500, and it comes in either a center console or a pilothouse version. And you can customize either one to fit your cruising lifestyle.

The good news is that the new Cape Powercats use the same hull as the one on the Buzzards Bay 34 power cat that received rave reviews when it was launched in 2010. When I was talking to JP Skov, a partner in Northstar Yacht Sales in Portsmouth, Rhode Island, who’s handling Cape Powercats, I realized that I actually had tested the Buzzards Bay back then, on a lousy afternoon, heading out from Falmouth on Cape Cod to cruise over to Martha’s Vineyard on three-to-four-foot lumpy seas.

I remembered at the time that the cat performed admirably, giving a relatively smooth ride without the pounding that I had expected. It turned easily and remained almost flat, and when we could find a stretch of decent water it produced an upper-30-knot top speed.

Chris White, of Chris White Designs in South Dartmouth, Massachusetts, drew that boat for Russell Hunt’s Multihull Development Inc. White had been designing multihulls for about three decades, and he got this one right.

The Buzzards Bay, and now the Cape Powercat, also are designed for the way many people use their boats today. The cats provide comfortable, fast, enjoyable coastal cruising with a lot of space for their length. The 12’ 7” beam means there’s room for everyone, or everything, you want to take along for a day, weekend or even a week on the water; a cat simply offers much more volume for its size than a comparable monohull.

But the real appeal is in the ride. The Cape Powercat has slender displacement hulls with a fine entry and full after sections. The boats accelerate quickly, track easily and they don’t pound. The deck between the hulls on the Buzzards Bay didn’t slam or make any noise while cutting through the waves and spray; the boat has a tall tunnel and ramped underbody.

“The ride of a Chris White-designed power catamaran is one of the best and most sea-kindly I have ever experienced,” says Skov. The lines of the boat are clean, functional and appealing. Skov says that a carbon beam aft gives the strength to deliver a wide-open platform with the cockpit and the helm deck all on the same level. “This feature has allowed us to deliver a boat to a client that is wheelchair-bound,” he said. ‘It also allows us to offer customizable layouts depending on the client’s boating style.”