You are at:Home»Cruising Life»Pregnant Wife Saves Husband from Shark in the Keys

A pregnant wife dove into the water to save her husband from a shark attack in the Florida Keys. She was not injured, but rescue personnel, who flew him to a trauma center in Miami, said his injuries were “severe.”

The shark attacked Andrew Eddy, 30, almost immediately after he slid off the back of a 20-foot motorboat on Sombrero Reef in the Middle Keys to go snorkeling about 10:30 in the morning. Eddy, from Atlanta, was there with his wife, Margot Dukes-Eddy, her parents, her sister, and her sister’s boyfriend. Several other people were snorkeling nearby at the time; Sombrero Reef is a popular snorkeling spot around a lighthouse. 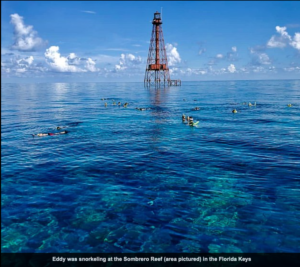 An eight- to nine-foot shark hit Eddy and latched onto his shoulder. Deputy Sheriff Christopher Aguanno wrote in his report that “Dukes saw the shark’s dorsal fin and then blood filling the water. Dukes, without hesitation, dove into the water and pulled Eddy to the safety of the boat.”

A boat took Eddy to Sombrero Beach in Marathon, where medics from the city’s Fire Rescue were waiting. A Monroe County helicopter air ambulance flew him to the Ryder Trauma Center at Jackson Memorial Hospital in Miami.

Eddy’s condition there was not available. The couple had been married for three years. Read more: