North Pacific Yachts is building a new, contemporary, Euro-styled 49-foot pilothouse trawler that it expects to launch this fall. It has more windows, more curves, and more interior volume than the company’s traditional 49 pilothouse model.

“With the Euro, we are excited to offer an option that’s fresh and modern, with the highest level of quality that you’d expect on the best traditional trawler,” said Trevor Brice, the company’s president.

The 49 Euro will come with many engine options, offering speeds up to 21 knots. The original 49, which North Pacific still builds, has a single 355-hp Cummins; it cruises from 7 to 10 knots and tops out at 12 knots.

The pilothouse windows in the new 49 Euro are wraparound, and provide a much more modern look than the raked windshield on the traditional 49. The pilothouse still has twin helm chairs, with seating aft that can convert to a pilot berth. Doors open to the deck on both sides. 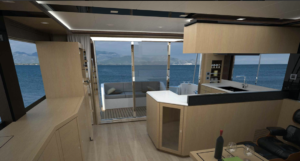 The 49 Euro also has a more contemporary salon with light colors and a large U-shaped galley aft to port. Larger glass doors open to the cockpit, where the integrated seating is protected by the overhang from the flybridge.

Below, owners can choose from the original two or three stateroom layouts, or opt for a new midships design for the master stateroom with the guest stateroom forward; both have large windows in the hull sides.

For later in the fall, North Pacific is also making a widebody version of its 44 Sedan, with an additional 18 inches in the salon. That space became available with the elimination of the port side deck. Larger windows in the salon offer more light and visibility all around, and the widebody also has a new integrated fiberglass staircase from the cockpit to the flybridge.

With offices in British Columbia, North Pacific now makes models from 44 to 59 feet. I tested a new North Pacific with Brice many years ago in Vancouver and was impressed by the quality of the build, the craftsmanship, and the comfort of the ride. It was a solid, well-finished, cruising boat.