A group of craftsmen in Idaho have just restored a 38-foot Chris-Craft that was first launched in 1929. The boat, Willow, was the first Chris-Craft Commuter Cruiser ever built, and it was delivered to William F. Ladd, a New York businessman. At that time, many New Yorkers used the-now iconic commuter boats to cruise from their summer homes on Long Island to their offices on Wall Street. This boat, then named Althea, was designed by Chris Smith, the founder of Chris-Craft.

The commuter has a mahogany-on-oak hull, a new teak deck, and a mahogany cabin. The restoration, at Coeur Custom, part of the Hagadone Marine Group in Coeur d’Alene, took 14 months and cost $300,000. The engine, a fresh-water cooled 350-hp gas Mercury V-8, was installed in 2016.

All told, the boat has seating for 12, on the forward cockpit, the bridge deck, and the aft cockpit. The forward cockpit has bench seating. Moving aft, the galley has a porcelain sink with a hand pump and an ice box. Across from the galley is a head with electric flush and a folding porcelain Pullman-style sink. 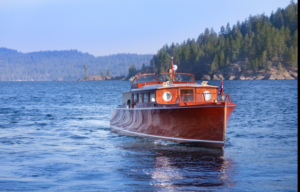 Next is the salon, with two settee berths facing each other; the backrests swing up to form berths. The boat has been restored with dark green upholstery and accents just like the 1929 original. Aft and up some steps is the open bridge deck with the helm on the port side and seats to port and starboard along the back. It has a folding canvas Bimini, Then farther aft, down some steps, is the aft cockpit with a full bench seat and room for deck chairs.

The boat was restored by Jerry Gilbreath, an offshore racer who used to be a vice president at Fountain Powerboats and a consultant to Mercury Marine. He is offering it for sale for $425,000 at Hagadone.