The new skylounge on the 76 is a large, light-filled social space with windows all around and full-width glass doors opening out to an upper aft deck. It even has a skylight for more natural light, and ventilation.

The skylounge basically functions as a second, all-weather salon, but with a better view. It also is the home of the yacht’s only helm station. It has a large L-shaped settee to port, a two person settee to starboard, and an open-air galley.

Designed by the Italian firm of Nuvolari Lenard, the new Monte Carlo 76 Skylounge is powered by twin 1,550-hp MAN diesels, or optional 1,650 MANs, producing a top speed of about 30 knots and a cruising speed of 24 knots.

With the helm up top, the salon on the main deck can be customized to fit the owner’s wishes, with the galley forward or aft. Owners also can choose among a wide variety of high-quality textures and materials to fit their own taste. The salon is surrounded by large wraparound windows that admit lots of natural light.

Glass doors lead to the aft deck, which is protected by the overhang from the skylounge. It has a large settee aft, facing a dining table that can accommodate five additional chairs. 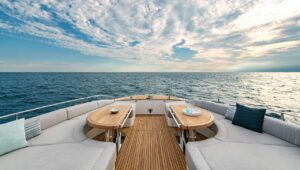 The foredeck is another large entertaining and lounging area, with luxurious seating port and starboard. Tables on each side are on stainless steel pedestals; they can be lowered to create two super-sized sun pads.

Below, the 76 has four staterooms with en suite heads and showers. The master is full beam amidships; the bed is centered, with a settee on the port side and a vanity to starboard. The large master head is aft.

The VIP guest cabin is forward, and two other cabins, with two berths each, are a bit aft, port and starboard. A possible crew quarters, with its own head and shower, are aft by the engine compartment.

Monte Carlo Yachts are the premium brand in the Beneteau Group; they’re made in Italy.