ACR just introduced a new ResQFlare electronic distress flare as a Coast Guard-approved alternative to pyrotechnic flares. The flare comes in a package with a distress flag that’s also approved by the Coast Guard.

The ResQFlare is a high-intensity LED flare that can be used as a day and night distress signal to attract the attention of rescue personnel in an emergency. It emits a flash with the characteristics of a Morse Code SOS, known around the world as a distress signal. It also rights itself in the water and provides 360-degree visibility for more than six miles.

The new flare is compact, lightweight, and easy to use. It lasts more than 20 hours, or three times longer than Coast Guard requirements, and it’s powered by a replaceable battery. 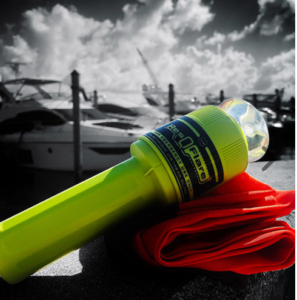 For its part, the distress flag can be flown at the highest possible point on the boat, waved on a boat hook, or displayed by hand. It also can be laid on deck to attract the attention of search aircraft.

With the ResQFlare, boaters don’t have to worry about the possible dangers of pyrotechnic flares, their expiration dates, or how to dispose of them after those dates.

The ResQFlare and distress flag replace the Coast Guard requirements for traditional pyrotechnic flares on vessels up to 65 feet boating on the Great Lakes, within 12 miles of U.S. waters, or on any body of water with a passageway to the sea that’s at least two miles wide.

The ResQFlare package, containing the flare and the flag, costs $79.95. Read more: