You are at:Home»Boat Reviews»Marquis Making New M42 with 3 Mercury Outboards

Marquis is putting the final touches on its new M42 cruiser with three 400-hp Mercury Verado outboards. The Pulaski, Wisconsin, builder launched the original M42 with twin 480-hp Cummins inboard diesels about a year ago, and it topped out at 40 knots. The new outboard version is expected to hit the 50-knot range.

Once the M42 outboard is officially launched, the Verados will be the standard power on the boat, with the Cummins offered as options. The company said it was recognizing buyers’ preferences in moving to outboard power, particularly in this size boat.

Donald Blount & Associates, the designer, worked with Marquis to extend the running surface and incorporate a swim platform to bracket the three outboards. “The M42 OB is a blast to drive,” says Josh Delforge, Marquis’ VP of design and engineering. “It turns on a dime, it’s a rocket ship at wide-open throttle, and the ride is extremely comfortable and stable.”

The M42 outboard has the same features and accommodations as the inboard version, with a large sun pad aft, a cockpit built for entertaining with U-shaped seating and a table, an outdoor galley with a sink, fridge and ice maker, and an optional grill. 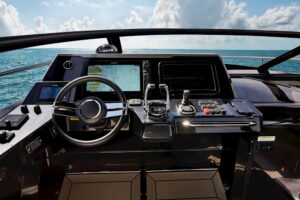 The helm station has a double-wide seat with high backrests and comfortable footrests. The helm itself is sleek and black and large enough to hold two 16-inch Raymarine displays.

Below, the M42 has a galley and forward seating that converts to a berth. The head is large, and the shower is large enough to hold two adults.

With the new outboard power, the boat now has a large aft storage area where the inboards used to be. It’s big enough to hold folding bikes, inflatable SUPs and a variety of water toys.