You are at:Home»Cruising Life»Whale Watching Aboard Idyll Time in Alaska

It’s the end of the season for Jeff and Susie Parker on Idyll Time, their Kadey-Krogen 48 North Sea Trawler, up in Petersburg, Alaska. They just posted their last wildlife pictures, of whales this time, that they took earlier this month in Frederick Sound for their blog idylltime.com.

The Parkers, from Chattanooga, Tennessee, certainly qualify as veteran cruisers. After they bought Idyll Time new in 2006, they cruised up and down the East Coast, completed the Great Loop, and did the ICW so many times that they said they were getting bored.

So two years ago they shipped the boat to the Pacific Northwest, and they’ve been cruising, and taking wildlife photographs, there ever since. After taking these, they had the boat hauled for the season at Piston & Rudder Service in Petersburg. Here’s their new blog posting:

Fall is in the air. The day light hours are getting shorter and shorter and the end of our cruising season is rapidly approaching. Our last week of cruising is spent enjoying the whales of Frederick Sound. This nutrient rich ecosystem is a popular hangout for the humpback whales. Whale researchers from around the world travel to these waters to study the whales. We have photographed many whale tails this year which we forward on to happywhale.com. From the photos, they can ID different whales and track their movements. We were happy to learn that Ikabaud and Norio, two whales that we Identified last year, have been spotted here in Alaska again this year after spending the winter in Hawaii.

While fishing one day, we watched as the whales were feeding in the distance. Several whales were breaching and doing the tail slap. 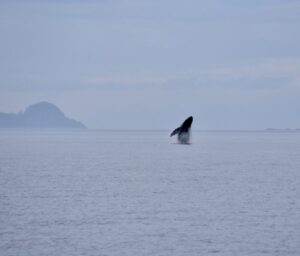 As the tide changed, we noticed them getting closer and closer to the boat. There was one pair of whales feeding together. It may have been a mom and calf. They were obviously working in tandem as they dove, lunged, and filtered their catch through their baleen. They repeated this several times. It was thrilling to watch. Read more: