Iliad Catamarans in Australia is making a new 60-foot power cat that it calls the ultimate voyager. The new Iliad will have a range of 3,500 nm at 7 knots when it’s launched in July, and it is one more example of the growth in long-range power cats around the world.

Iliad Catamarans were launched just two years ago by Multihull Solutions in Mooloolaba, Queensland, on  the Coral Sea. So far they have launched a 50 and a 70, and are working on an 80 after they complete the new 60. All the boats are made in China.

The 60 has lots of outdoor social areas and a large, open salon with lots of natural light from windows all around. The flybridge can be open or enclosed. It has seating for ten people, a galley with a grill, fridge, bar and ice maker, and the upper helm station. A second helm is optional on the main deck, with access to the foredeck through a front door.

There’s room for casual dining on the aft deck, and it has a separate head and shower under the stairs to the flybridge. A locker in the transom is large enough to store surf boards, dive tanks and water toys. 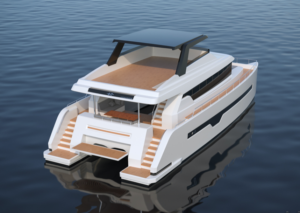 You can order traditional davits on the transom or a transom lift platform for your tender, or have the optional crane on the flybridge.

Large glass doors open to connect the aft deck seamlessly with the salon and the epicurean main deck galley. It is equipped for long cruises with a double stainless steel sink, Corian countertops, a full-sized fridge/freezer, plus 360-degree panoramic views.

Below, all the cabins have large windows for natural light, and the boat can include a laundry, workshop, office and even separate crew quarters accessed from the two bows for privacy. The owner’s stateroom has a king-sized bed, a walk-in closet, lots of storage areas and a head with a shower that’s large enough for two.

Iliad can customize the interiors per an owner’s wishes, with exquisite finishes and fixtures. The company says the boat is designed in the style of a luxury apartment with lots of living space.