Dromeas, a Turkish builder, just launched a D28, with the same strong, clean, minimalist lines as those in the increasingly popular Axopar or Nimbus boats. The Dromeas D28 is a little pocket cruiser or weekender, with a protected wheelhouse, a double berth and head below, and outboard power.

Dromeas was founded in 2017 in Izmir, on the Med, and it now has a lineup from 28 to 38 feet. It launched a 28 center console and walkaround first, and then recently built the D28 with the fully enclosed wheelhouse, designed by Adam Younger, the British naval architect who has developed fast offshore boats.

The Dromeas D28 has a deep-V hull for performance and two steps, just aft of amidships that decrease as they flow toward the chine. The idea is that they will keep the hull from sliding in sharp turns. The company uses contemporary construction techniques, with vacuum-infused, epoxy-glass composites for low weight and high strength. 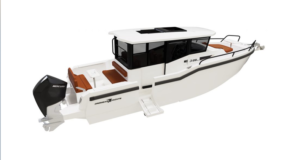 The wheelhouse has wide side doors for easy access to the side decks (they’ve wide, too), and a helm seat for two. The windshield is raked, for a sporty look; it also reduces glare. A bench seat aft can be converted to a double bed.

A fold-down gate with a swim ladder is built into the hull on the starboard side, and the boat has a table and sun pad options fore and aft, plus a wet bar. There’s plenty of storage space, including a large lazarette under the cockpit sole.

The D28 can be powered by a single or twin outboards. It hits 50 knots with two 225-hp Mercury outboards or a single 400-Mercury Verado outboard. The company is planning to build a 33- and 38-foot version of the D28 in the future.