You are at:Home»Cruising Life»Italy’s Robinson Crusoe Forced Off His Island

In 1989, Mauro Morandi was trying to sail around the world. His engine died and he ended up on the Isle of Budelli near Sardinia. He’s been living there, as the sole inhabitant, ever since. Now, Morandi, who’s now 81 years old, has been forced out. Read about him in this story in the Daily Mail:

An 81-year-old man known as Italy‘s Robinson Crusoe who has lived alone on an island for 32 years is finally moving after surrendering his eviction fight.

Since 1989, Mauro Morandi has been the sole inhabitant of the Isle of Budelli near Sardinia, after he decided to ditch his life as a PE teacher and become the island’s caretaker when he washed up on its iconic pink beach Spiaggia Rosa.

The island’s previous caretaker was on the verge of retirement when Morandi arrived so he abandoned his sailing plans, sold his boat and took over the role.

He had been sailing to the south Pacific when his catamaran’s engine failed and he headed towards the picturesque island.

But five years ago, the Italian government made the island part of a national park and they have been attempting to evict the hermit.

He has finally given up the fight will move into a small apartment on the nearby La Maddalena island, the largest in the archipelago, according to The Guardian.

Morandi’s current home is a former WWII shelter overlooking a bay and over three decades he has become acquainted with the island’s animals, trees and rocks.

La Maddalena’s national park authorities want to reclaim his home and turn the island into a hub for environmental education. 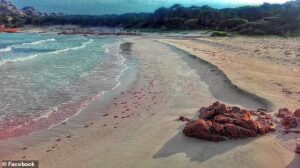 The authorities have also argued he has made changes to his building without the necessary permits.

Morandi said: ‘I have given up the fight. After 32 years here, I feel very sad to leave. They told me they need to do work on my house and this time it seems to be for real.

‘I’ll be living in the outskirts of the main town, so will just go there for shopping and the rest of the time keep myself to myself. My life won’t change too much, I’ll still see the sea.”

The hermit is originally from Modena in central Italy but has for years guarded Budelli, cleared its paths, swept its beaches and taught day-trippers about the environment.

Morandi, who has become popular online posting photos and videos from the desert island, has attracted thousands of signatures on petitions trying to keep him on the island.