The latest Palm Beach GT60 just made its debut at the Sanctuary Cove International Boat Show below Brisbane in Australia. The sleek, sexy, low-slung sedan with a classic tumblehome and long sheerline drew the crowds and admirers the brand is known for.

The standard GT60 comes with two large staterooms with double beds and generous en suite heads and showers. It also has a modern gourmet galley and both indoor and outdoor dining and social areas.

Beyond its head-turning looks, the GT60 performs. The boat has a low center of gravity, and its warped-V hull slices through the waves (instead of climbing over them). The semi-displacement hull form reduces drag but adds buoyancy and lift. And it’s efficient throughout the speed range.

The Palm Beach GT60 is largely the brainchild of Mark Richards (pictured below), who founded the company in the seaside town of Palm Beach, about 25 miles north of Sydney, in 1995. The boats are now made in Malaysia, next to those from their sister company, Grand Banks. Richards is a world-class sailor (he’s won the Sydney-Hobart race a record nine times) and he’s a firm believer in high-tech, low-profile, lightweight boats. “The GT60 is an absolute dream,” he says. 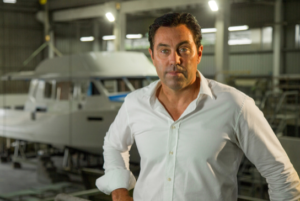 You can walk on the boat via the large, teak swim platform and enter the cockpit on the starboard side. An L-shaped lounge is across the transom, with a bar, fridge and storage forward. Press a button, and the cockpit sole raises up to reveal a RIB underneath.

In the salon, there are more buttons to operate the side and aft windows. More light streams in from the massive, one-piece curved windshield, and the overhead moon roof. There’s an L-shaped settee to port and a three-person settee to starboard. The two-person helm seat faces the walk-around carbon fiber helm station. A single mate’s chair is to port.

Below, the master stateroom is amidships, with the bed on the starboard side. The VIP stateroom is in the bow, with lots of walking-around and storage room. The galley is on the port side.