You are at:Home»Cruising Life»Riva Making New 68 Based on Iconic Hull

Riva, the iconic Italian builder, just announced that it’s making a new 68 Diable, based on the classic Riva Super America hull. Riva, now part of the Ferretti Group, plans to launch the 68 Diable in September.

With Riva’s unmistakable lines, the 68 Diable has three staterooms, all with en suite heads,  and a 40-knot top speed from optional 1,650-hp MAN diesels. Standard 1,550-hp MANs produce a cruising speed of 33 knots and a top speed of 37 knots, with a range of 260-nm. 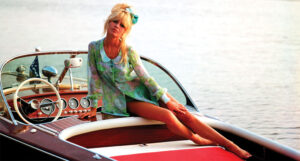 The new 68 Diable was drawn by Mauro Michell, the co-founder of Officina Italiana Design, with Ferretti designers and engineers. The latest yacht in Riva’s deep history, the 68 Diable has the elegant, clean and head-turning lines that have made Rivas the yacht of choice for the rich and famous around the world for generations. In earlier days, Brigitte Bardot had a Riva (pictured above), so did Princess Grace (Kelly) and Prince Rainier (below) and James Bond. Today, George Clooney keeps a Riva at his waterfront villa on Lake Como in northern Italy. 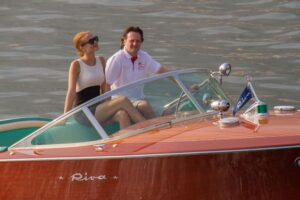 In the new 68 Diable, the cockpit has two large sundecks, one with a lounge facing aft and another that can be covered, along with the aft dining area, by an automatic sliding Bimini that’s integrated into the hardtop. There’s another social area on the foredeck. The innovative  roof over the bridge deck can be opened in two directions, forward and reverse.

Below, there’s a large open area with a galley and dinette. The master stateroom is amidships, the VIP is forward, and the third cabin, with two single beds, is to port.