For the past 65 years, OTAM  has been making custom cruising yachts, ranging from 45 to 130 feet, in its yard in Liguria, Italy. The new 70HT was built with the same customization, craftsmanship and luxury that have defined the brand.

The hull comes from Umberto Tagliavini Marine Design; the rest of the boat from the BG Design Firm, which said that “the design is strongly inspired by the aeronautical world and luxury sports cars.” Indeed, the dashboard is designed to look like the console on a fighter jet.

The OTAM is built to perform. The MTUs are linked to Arneson surface-piercing drives with custom OTAM Rolla props, giving the boat a top speed of 50 knots. With upgraded 2,400-hp CAT engines, the boat will top out at 53 knots. 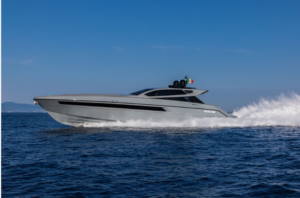 The new 70HT has a low center of gravity, and a 21-degree deadrise at the transom for offshore performance. It also has a Seakeeper gyro stabilizer to keep everyone on board comfortable.

The owner of this boat chose a cockpit and salon with sofa seating on the port side for entertaining large groups. A glass screen separates the salon from the cockpit, but if you push a button the screen retracts between two C-shaped sofas, opening up the cockpit and salon as one integrated social area.

The owner’s suite and two guest cabins are below. The new OTAM has a separate galley and crew cabin in the bow with its own access for privacy. The boat is 73′ 2″ LOA, with a beam of 18.’ We don’t have any other specs. Read more: