You are at:Home»Cruising Life»One Dead in Boston Harbor Boat Crash

A 35-foot center console crashed into a day marker in the Boston Harbor just after 3 a.m. on Saturday, sending all eight people on board into the water. Rescue workers were able to retrieve seven of them fairly quickly, but they had to search until 10 in the morning to recover the body of the eighth, a woman.

Five of the seven were taken to local hospitals but there were no reports of their injuries. The capsized boat was recovered and will be used in reconstructing the accident.

Amanda Wyrick, a public affairs officer with the Coast Guard, said the crew of a tug boat saw the center console hit day marker “5” off Castle Island in the harbor at a high rate of speed at 3:06 a.m. and called the Coast Guard. 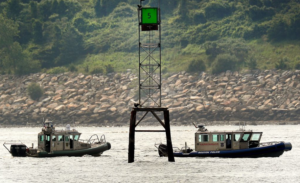 The Coast Guard launched a 29-foot response boat from Boston and a helicopter from Cape Cod. Other boats from the Boston police and fire departments and the Massachusetts State Police joined the search for the missing woman.

A Boston police homicide unit is investigating her death with the Suffolk district attorney’s office. The state Boat and Recreational Vehicle Safety Bureau is working on a reconstruction of the crash.

The authorities have not released the names of the other people involved. Read more: