A British father and son just rode their electric-powered hydrofoil Fliteboards across the English Channel in 1 hour and 44 minutes, setting a Guinness World Record for their performance.

Rob Wylie, 51, and his son Morgan, 19, started in Cap Gris-Nez in northern France and rode, or foiled, for 23 miles until they landed in Folkstone, England. They both fell off their boards several times because of masses of seaweed in the water and fishing crates bobbing on the surface. 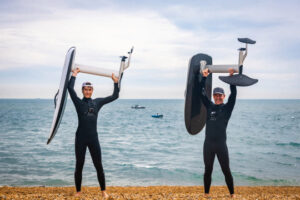 Rob said that about half way across he didn’t think they would make it. The batteries were getting low “and it was choppy as hell.” When they stepped ashore in Folkstone, he had only 4 percent of his battery power remaining.

The Fliteboards ride about three feet above the water and go about 20 mph. They’re controlled by handheld Bluetooth remotes, and they’re powered by an electric motor, leaving almost no wake or exhaust behind. And they’re silent.

The Wylies trained for several weeks for their trip. And they contacted Guinness World Records to confirm they would set a new record if they completed the crossing. See the video of their crossing below, and read more at http://fliteboard.com