The new, aggressively styled Sunseeker Manhattan 55 will make its U.S. debut at the Fort Lauderdale International Boat Show, starting Oct. 27. The British builder also will show its new 65 Sport Yacht there. They will be presented by Sunseeker’s U.S. distributor, OneWater Yacht Group of Fort Lauderdale.

A luxury performance cruiser, the Manhattan 55 is marked by windows in all sizes and shapes in the hull and salon, with stainless-steel details, adding to its dynamic look. It’s designed as a comfortable family cruiser, with three cabins and two heads below, a beach club aft, a large open-plan salon, and a flybridge perched on top.

Powered by twin Volvo 800-hp D13 engines, the yacht has a cruising speed of 25 knots, with a range of 230 nm, and a top speed of 32 knots. Buyers can order straight shaft or IPS pod drives. Volvo’s IPS1050 pod drive uses the same blocks as the straight-shaft version.

The boat is meant for an owner-operator. Sunseeker says that in the past, most buyers of boats in this size range order them with straight shafts, perhaps because they usually are experienced owners who are familiar with the traditional propulsion system. 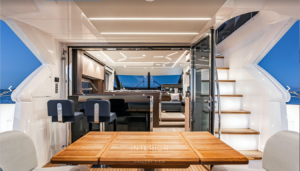 The Manhattan 55’s salon is filled with light, and has an innovative powered glass window on the aft bulkhead separating the galley from the cockpit. With the window down, and the large glass aft door open, the salon and cockpit blend into one large indoor-outdoor space. Two bar stools are set at the window opening in the cockpit, while a large U-shaped lounge with a table is aft at the transom.

The boat has a large swim platform, with a beach club opening out of the transom. It has an optional built-in barbeque, an overhead shower and fold-down seating.