You are at:Home»Boat Reviews»Blue Game Launches Creative New 72 at Cannes

Blue Game just unveiled its hard-to-define new 72 at the Cannes Yachting Festival, where the aggressively styled cruiser with an aft deck that seems to go on forever caught a lot of attention.

An Italian builder, Blue Game is a brand of San Lorenzo yachts, and it specializes in non-traditional styling that defies the usual yacht categories. Indeed, the company says the new 72 “is the perfect expression of its cross-over soul that escapes from belonging to a single segment.”

The interiors can be customized, but the standard power comes from twin 900-hp Volvo IPS1200 pod drives for easy maneuvering and superior fuel efficiency. Twin 1,000-hp IPS1350s are upgrades, and give the Blue Game 72 a top speed of 32 knots. The hull has 14 degrees of deadrise at the transom. 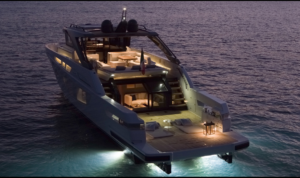 But it’s the outdoor areas of the yacht that catch immediate attention. The large swim platform can be lowered so it’s a bit underwater when guests want to enjoy water sports. When it’s up, it becomes part of  a massive aft deck with sun lounges and relaxing areas.

Staircases on both sides lead up to the main deck, where the salon has windows all around and more lounges and tables for relaxing, with the wheelhouse forward. The 72 has 360-degree visibility from the helm.

Below, on the accommodations deck, the owner’s cabin is forward, and two guest cabins, with two berths each, are a bit aft. They all have en suite heads. A two-person crew quarter is forward, with its own head.