The 372 is a new iteration of the original Back Cove 37 that was first launched in 2009; that turned out to be one of the Maine builder’s most  popular models. More than 200 of them were sold, and the tooling was getting worn out.

With a single diesel engine, a low profile and its Down East lines, the 37 was popular because it was a Goldilocks boat – not too big, not too small. A single person could handle it safely, while it could hold a crowd when so desired. It worked as everything from a family boat to a couple’s cruiser, suitable for picnics, a weekend cruise, the Great Loop, or cocktails and entertaining at the dock.

So far, this fall has been a good one for Back Cove. The new Back Cove 39O just won the People’s Choice Award at the Newport show. Powered by three 400-hp Mercury Verado outboards, the 39O is the fastest Back Cove yet, hitting a top speed of 44 knots.

And Back Cove recently announced it built its 1,000th boat since the company launched its first boat, a 29, in its Rockland plant in 2003. Back Cove is a sister company to Sabre Yachts. 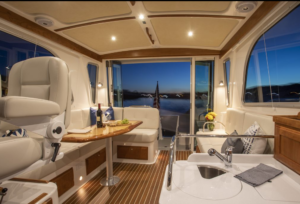 Now the 372 is having its first public showing at another East Coast cruising center, Annapolis, where the show is built around the City Dock (“Ego Alley”) in the heart of town, just a block from the Naval Academy.

One of the new additions is an aft-facing seat in the cockpit, just below the window on the starboard side and opposite a large glass bi-fold door opening to the salon on the port side. With the door and the window open, the cockpit and salon flow together as one unit.

The helm pod was also redesigned, with more space for electronics; the 372 has a new black windshield liner, and fixed glazed windows in the pilothouse. Below, the head has been updated, with a larger shower.

But the 372 remains true to its roots. There’s still lots of teak and holly flooring, and Back Cove’s varnished cherry is laid out throughout the interior.